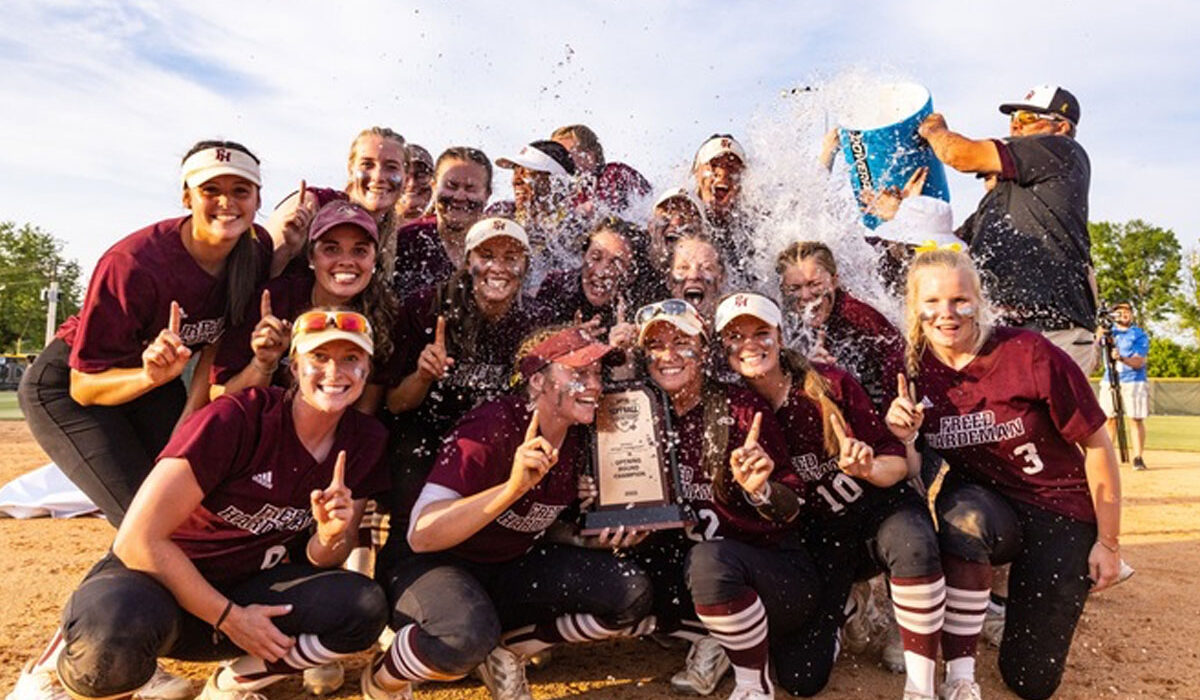 HENDERSON – After being upset in the first round of the Henderson regional of the 2022 NAIA Softball World Series, Freed-Hardeman University came storming back to win four consecutive elimination games to punch their ticket to the 2022 NAIA Softball World Series in Columbus, Georgia. The Lady Lions forced an if-necessary game with a 5-0 victory over Columbia (Mo.) College before besting the Cougars in game seven 2-0.

Freed-Hardeman (51-4) used the middle innings to power their way into the site final with a two-run third inning which was followed by single runs in the fourth, fifth, and seventh innings to take the game one win 5-0.

Brittan Jarrell tallied a one-out single in the top of the third inning, only to be driven home by Allie Mitchell’s two-run no-doubt homer over the left-field fence, giving FHU the 2-0 advantage over Columbia (35-11).

After Cassie Hayes singled into left field, it was Anna Kate Norton’s double to left-center that plated the Lady Lion first basewoman to take a 3-0 lead. The top of the fifth inning saw FHU score their fourth run when Hayes singled up the middle to plate Sophie Dunavant, who reached earlier in the inning with a single of her own.

Catherine Crabb’s double to center set up Dunavant to lace a sacrifice fly into right field to allow Kennedy Harris, who had led off the inning with a walk, to score the final FHU run.

The Cougars used a three-pronged pitching attack, with Lexi Dickerson (13-4) picking up the loss, with Madison Ramsey, and Alyssa Roll both joining the campaign in relief.

Brittany Adair (18-0) showed why she is one of the nation’s top strikeout leaders, punching out 11 Cougars in the complete-game shutout.

A pair of RBI doubles in the bottom of the fourth inning vaulted Freed-Hardeman (52-4) to victory in the bracket’s final game. Columbia (35-13) tied FHU in the hit column, with both squads rallying for four hits.

After singling to left field in the bottom of the fourth inning, Sophie Dunavant rounded the remaining bases to score thanks to Caitlin Mitchell’s two-bagger that found a hole in the gap in right field. Mitchell’s pinch-runner, Madeline Crabb would watch a strikeout before Annalise Jarnagain doubled to the same spot as Mitchell to plate Crabb to give FHU the 2-0 advantage.

Athena Wheeler started a rally for the Cougars in the top of the fifth inning, singling into right field, and moving into scoring position when Karolina Arbova was hit by a pitch. A sacrifice bunt would move both runners into scoring position with two outs, but FHU starter Chloe Winters (16-2) induced a groundout to leave the tying run stranded.

After Winters exited with a seven-strikeout performance in 5 2/3 innings, Brittany Adair returned to the circle to shut down the Cougars, earning her third save in the process.
Cougar pitcher Ella Schouten (18-4) was impressive in the circle as well, striking out six while not allowing a base on balls.

FHU’s Jarnagin paced her offense, going 2-for-2 from the plate while driving in a run. Dunavant and Mitchell also tallied base knocks.

Freed-Hardeman will pack their bags to play in the 2022 NAIA World Series in Columbus, Georgia. The tournament features ten regional winners in a double-elimination tournament May 26-June 1 with the Lady Lions’ first opponent to be announced.