Railsplitters unable to upset No. 5 Flyers in Illinois 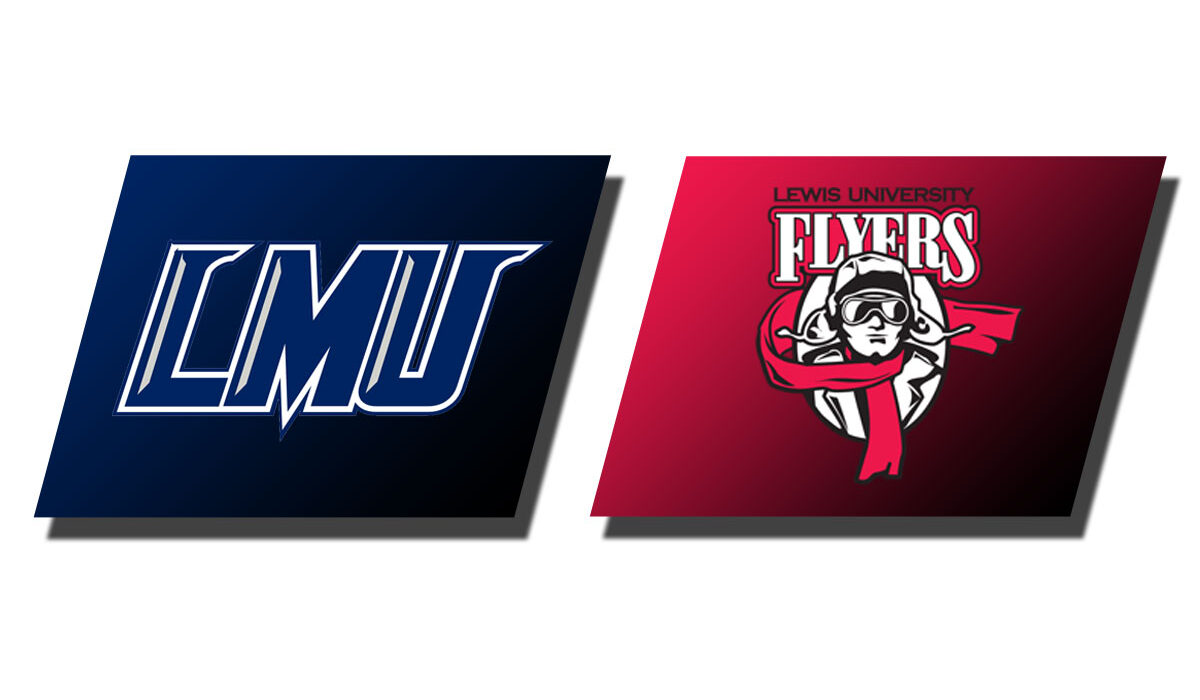 ROMEOVILLE, Ill. – Taking on its second Midwestern Intercollegiate Volleyball Association (MIVA) opponent on the road in as many days, the Lincoln Memorial University men’s volleyball team was unable to upend one of the nation’s elite Saturday night in Romeoville, Illinois. The Railsplitters (1-2) showed grit and played three close sets at fifth-ranked Lewis University, but ultimately fell 3-0 inside Neil Carey Arena.

The host Flyers (3-0), who feature four National Volleyball Association (NVA)/American Volleyball Coaches Association (AVCA) All-Americans, created separation late in all three sets as the two teams exchanged multiple leads in each stanza. Attacking at a .218 clip for the match, LMU laid down 36 kills but was hampered by a .107 attack percentage in the third set. Both squads notched at least 10 kills in each set, but Lewis proved to be more efficient hitting .333 for the night and claiming 21 kills in the second set alone.

Totaling 45 kills across the three sets, the Flyers recorded at least 12 kills in each and made nine total blocks at the net. With just six combined aces in the match, the Railsplitters earned five total blocks.

Overcoming eight attack errors and a .121 hitting percentage in the opening set, LMU had chances to pull away but Lewis got key kills in big moments. Trailing 12-6 and 13-8, the Railsplitters got within a point thanks to kills by sophomore middle/right side hitter Dawson Walker and sophomore outside hitter Johansen Negron, in addition to a service ace from sophomore setter Ryan Foy and a Flyer attack error. Another four consecutive points capped by a kill from senior middle hitter Pedro Carvalho gave LMU a 17-15 lead. Sophomore outside hitter Jacob Titus rose up for a kill to keep the Railsplitters in front at 18-16 before Lewis won the following four points. Another Titus kill and a kill by freshman right side hitter Justin Sharfenaker kept LMU within a point at 21-20 but the Flyers would win four of the next six point to take the first set, 25-22.

Lewis swung at a .206 clip in set one with 12 kills before the second set saw both the Railsplitters and the Flyers attack at over .460. LMU registered 14 kills in the second set on a .462 attack, while Lewis hit .486.

The Railsplitters jumped out to a 3-1 lead in a tightly-contested second set as neither team held more than a two-point advantage until late. Trailing 21-19, back-to-back kills from Titus knotted things up at 21 apiece. However, much like the opening set the Flyers came up with a pair of kills and a block to grab hold of three set points at 24-21. A Lewis serving error gave life to LMU but a kill by the Flyers’ Landon Krause ended the set at 25-22.

The Railsplitters secured 10 kills in the third set with Lewis compiling 12 kills off a .280 attack. Facing a two-set deficit, LMU struggled early in what would become the final set and found itself trailing 15-12. Sparked by a kill from Negron, the Railsplitters rattled off three consecutive points to take a 17-16 lead on a Negron service ace. Moments later, Sharfenaker connected on back-to-back kills to put LMU ahead 19-18. After the Flyers won the ensuing three points, two-straight kills from Titus evened the set at 21-all. However, Lewis would not be denied and got a trio of kills from Krause and a block to close out the match and set at 25-21.

Sharfenaker led the way for the Railsplitters with a team-high 11 kills while Titus finished with 10 kills and five digs. Negron had eight kills to go along with a pair of aces and Walker made four blocks. Foy reached a season-high 33 assists and Sharfenaker also contributed five digs and a pair of blocks.

Krause led the Flyers with 18 kills and five digs as Lewis’ Tyler Mitchem claimed 12 kills and a match-high five blocks. Reigning MIVA Player of the Year Ryan Coenen racked up nine kills and the Flyers got 34 assists and a match-best six digs from Kevin Kauling.

LMU wraps up its three-match road trip in the Land of Lincoln Sunday afternoon at McKendree University. First serve from inside the Melvin Price Convocation Center is slated for 3 p.m. ET. Next week, the Railsplitters take on another MIVA opponent on the road when they travel to receiving-votes Ball State for a pair of matches Thursday and Friday, Jan. 28-29.