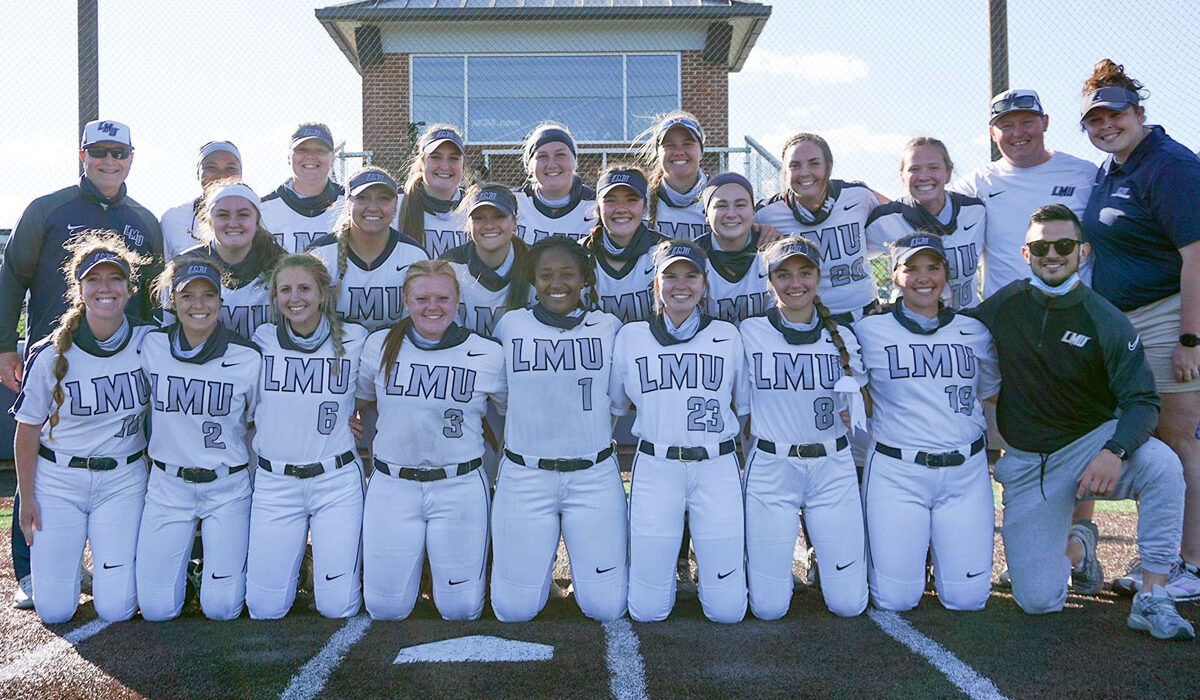 HARROGATE – Planting an emphatic note on what’s already been arguably the greatest season in the history of the program, the Lincoln Memorial University softball team evaporated South Atlantic Conference foe Lenoir-Rhyne at Dorothy Neely Field on Thursday afternoon in yet another lopsided sweep, obtaining their second league regular season crown in school history by doing so with one more doubleheader remaining on the schedule.

Behind an overall record of 33-4 and a perfect home resume of 19-0, the Lady Railsplitters’ 26th and 27th straight Harrogate victories over the Bears gift the blue and gray with the #1 overall seed in next weekend’s South Atlantic Conference Tournament regardless of what happens in Saturday’s finale vs. Wingate, continuing a magnificent 2021 with a pair of dominant showings against the only team that was picked ahead of them in the preseason SAC projections.

Unleashing the highest number of runs at home across the entire semester in a bludgeoning Game 1, LMU gathered its eighth mercy-rule triumph of the spring in a 12-2 dismantling to get the day started. Quickly regaining their footing after falling behind early 2-0 in the second half of Thursday’s DH, the Lady Railsplitters responded with twice the firepower to secure their 12th sweep of the year by an 8-3 difference, improving upon what is already the most wins in all of NCAA Division II this year.

Only needing one win to at least gain a share of the league championship entering the day, fourth-year Head Coach Ritchie Richardson‘s club took the Bears to the woodshed in the opener, reaching 11 unanswered scores (including seven in the bottom of the 3rd), only requiring eight hits to reach their second-highest margin of victory across the entire calendar thus far.

Eclipsing the highest number of runs through any of the team’s 19 home appearances, LMU was boosted to the blowout partly off the shoulders of first baseman Emma Webb, who torched Lenoir-Rhyne all afternoon on a 3-3 showing at the plate with two RBI, two runs, and a double just in Game 1.

The 2nd inning marked the beginning of the Lady Railsplitters’ scoring avalanche, producing a quartet of runs during their second turn at-bat, kicked off with a double past the shortstop from designated player McKenzie Henry. An L-R fielding error in the ensuing fielder’s choice scenario handed LMU a 2-0 run that was multiplied by a deuce before that frame was fully over.

The Bears endured another self-inflicted wound to put them in an even larger hole once Henry was able to sprint from 3rd base to home on a wild pitch from starter Morgan Beeler. A perfectly-placed bunt from speedy centerfielder Bella Buccellato brought Kelsie Tuggle around the diamond to put the blue and gray ahead by a four-run clip with a legion of damage still left to be unfolded.

In one of the most dominant singular innings of the entire season, Lenoir-Rhyne was forced to switch pitchers on three different occasions before they could tally the next three outs, while the Lady Railsplitters exploded for the next seven scores in a period that totaled 11 at-bats.

A passed ball with the bases juiced provided another gaping hole for LMU to send in their fifth run of the day, before a sacrifice fly ball from Tuggle made it 6-0 in the blue and gray’s favor. A two-RBI double from lead-off hitter Ty-Kella Goins threatened to put the Lady Railsplitters into the double-digit circuit on the scoreboard, prior to another L-R fielding error in an FC situation and the second two-RBI double of the contest from Webb that eventually did give LMU that overwhelming advantage at 11-0.

Lauren Rakes managed to give the Bears some positive light in the top of the 4th with a two-RBI single down the left side of the field, although another SAC fly from Buccellato later that same inning put the nail in the coffin across the ten-run victory.

Sophomore Emma Frost’s immaculate play in the circle handed the LMU ace her 15th individual win of 2021 in the shellacking, while Beeler ultimately took the loss for the visitors by giving up exactly half of the blue and gray’s runs on six hits.

Having bumped up one spot to the #7 position in Wednesday’s National Fastpitch Coaches Association rakings, the Lady Railsplitters collected three more runs in Game 2 than they had gathered during all of the first outing, cruising to their eighth straight W by virtue of an 8-0 run after giving up an early two-run burst.

L-R’s Kylee Leonhardt blasted a two-RBI homer in only the second swing of the game to mark the only time in the afternoon LMU would find themselves fighting from behind. It wouldn’t last long though, as junior shortstop Sierra Hucklebee answered with her third home run of the semester in the bottom of the 1st to also bring Goins home, deadlocking Game 2 at two all.

The Webb-Goins-Hucklebee trio was a nearly unstoppable one to finish out the sweep, as those three players combined to go 7-11 with the bat in their hands, combining for six RBI along with two more of those from sophomore Madison Henry.

Pouring in four 2nd-inning runs for the second time on the day, a Goins double and Henry single in consecutive order put the Lady Railsplitters back in front by a 4-2 clip. That edge extended to a four-run lead once Webb dropped in her third and fourth RBI of the series, scoring Henry and Hucklebee on a centerfield single.

A leftfield double from Goins (her third of the game and the team’s sixth of the day) coupled with a Henry sacrifice fly in the bottom of the 3rdspiraled the advantage to 8-2, where the blue and gray held Lenoir-Rhyne to just a single run from that point, squashing the Bears and witnessing their first SAC Regular Season crown since the 2019 campaign in which they advanced all the way to the NCAA Division II Southeast Super-Regionals.

Pinch-hitter Taylor Beard mustered an RBI-single in the top of the 4thfor the visitors to bring the final score to a five-run cushion, where junior Bailey Griffith moved to 11-2 personally in the circle on five strikeouts. While pulling double-duty as a hitter in both games, Rakes dropped to 6-5 after throwing the entire bout on 10 hits given up.

Ensuring that the 2021 South Atlantic Conference Championship wouldn’t be shared with another school and would occupy the space in Harrogate unimpeded, the Lady Railsplitters will turn their attention to Saturday’s regular season finale vs. Wingate, which will serve as Senior Day for both Ty-Kella Goins and Audrey Petoskey.

Once again putting the longest home winning streak in the country on the line for another league two-parter at 12:00 and 2:00 p.m. from Dorothy Neely Field, LMU will aim to close out their extraordinary season on a high note before the conference tournament commences on a neutral field six days later.

Next to a 13-9 league resume and a 20-16 record altogether, the Bulldogs handled Newberry in their last appearance on Wednesday in North Carolina, pulling out back-to-back wins by a margin of 10-2 and 5-4 to hoist their winning streak up to four. Currently at 9-18 all-time against Wingate dating back to 1996, the Lady Railsplitters were able to snap a six-game losing streak to the Bulldogs in 2019 by earning a Game 2 W in Harrogate in an 11-10 shootout, before then ending WU’s season in the Quarterfinals of the Southeast Region 3-1.