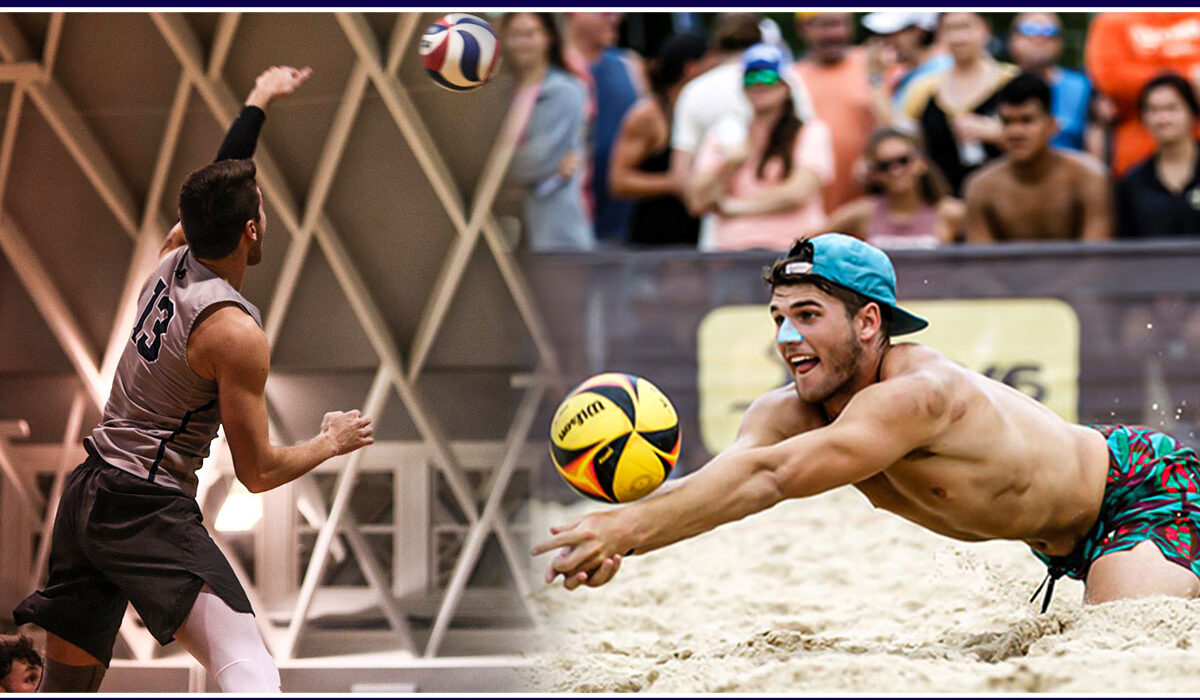 HARROGATE – Nobody could have predicted the ending to Evan Cory’s collegiate career, however, nobody could have predicted the outstanding start to his professional career either. Evan Cory, the best men’s volleyball player in Lincoln Memorial University history, seamlessly made the transition from the indoor courts to the beach courts following an abrupt end to his senior campaign in March of 2020. He has been excelling within The Association of Volleyball Professionals (AVP), the gold standard of beach volleyball, and is already ranked among the top 100 men’s players in the United States.

The first National Volleyball Association (NVA)/American Volleyball Coaches Association (AVCA) All-American in Railsplitter men’s volleyball history, Cory is on the fast-track to become the next big thing on the beach tour. Since turning pro last summer, Cory has captured 11 beach tournament titles and finished no worse than ninth at any event.

“We had always talked about every day being your senior day with Coach Cash,” spoke Cory in regard to the unusual end to his indoor playing days at LMU. “I just didn’t know that was going to apply to life so real in my senior year. We were about to go play two top-15 teams in the country, we’re having our last practice before getting on the bus the next day and then all of a sudden you get a call right before practice starts and the season is over. Thankfully, we were able to have our last practice. We convinced Coach to let us have that because I thought that was important to at least have something under our name and kind of go out on our own terms, although the pandemic didn’t really let us.”

Instead of dwelling on the fact that everything he had worked so hard for over the last four years suddenly got stripped away by a global pandemic near the end of his illustrious college career, Cory almost immediately got to work on his professional beach volleyball career. Staying in Harrogate and on campus because of the low COVID-19 case numbers in the area at the time, Cory began training using whatever resources and spaces he could find.

Having a training partner in fellow graduating senior NyJaee Washington, Cory was able to put in the foundation work to his pro career with the help of his teammate.

“He really helped me out,” commented Cory. “I told him, ‘I don’t know when we’ll be back to any sort of normalcy, but I want to be ready. I don’t want this thing to halt the progress that we’ve been making’.”

Getting creative to stay in shape and stay active like many athletes around the world, Cory and Washington utilized the beach court on campus, ran hills, found whatever weights they could and worked out outdoors as much as possible. Finally able to return to home to Metairie, Louisiana, right next to New Orleans, Cory was able to join the AVP America Tour the last weekend of May. Because of his hard work during the most uncertain of times, Cory found immediate success. He finished second in his first tournament before taking home back-to-back tournament wins the first two weeks of June.

“I wanted to be ready and I think that was a time when a lot of people weren’t ready,” said Cory. “A lot of people took time off and re-assessed things. It was the beginning of my career so that’s the last thing I wanted to do. I hit the ground running and I haven’t stopped, except maybe a week or two break here and there.”

One of the first signees in Railsplitter men’s volleyball history, Cory helped build the program from the ground up as a true freshman in 2017. The 6-foot-4 opposite hitter, now defender on the sand, attributes a lot of his success on the beach tour to what he learned as a student-athlete at LMU. With beach volleyball being an individual sport with a doubles partner, it is very self-driven and self-oriented.

“A big thing that helped me out was going back to my freshman year, the first year of the volleyball program and building something,” remarked Cory. “We had to build a culture, we had to figure things out. It was kind of like starting over, not a whole new program but this time I am the program. I’ve got to figure out how I want to brand myself, how I want people to see me in the community because that is all really important as a professional athlete.”

Cory added, “Really just trying to figure out anything, whether it be play style, my lifting regiments or really any aspect of life you can think of. LMU really prepared me for that, especially with the starting of that program. We had no blueprint of success, we had to create our own blueprint. That was super awesome and then Coach Cash, the mentality that he taught me really was a plus. We talked a lot about going out and being a predator and not prey. You just have to go out there and go for the kill.”

There have already been some incredible opportunities Cory has experienced in his rookie year. Last summer and then again gearing up for the 2021 AVP Tour, Cory got to train with former Olympians Phil Dalhausser and Nick Lucena. The top two beach volleyball players in the nation and current teammates, Dalhausser won gold at the Beijing 2008 Summer Olympics while Lucena teamed up with Dalhausser at the Rio de Janeiro 2016 Summer Olympics. A part of the first U.S. beach team to win gold at the Fédération Internationale de Volleyball (FIVB) Beach Volleyball World Championships in 2007, Dalhausser is an AVP Tour MVP. Both Dalhausser and Lucena will be representing the U.S. in this summer’s Tokyo Olympic Games in Japan for their fourth and second Olympics, respectively.

“It’s really cool being able to pick their brains and getting to see what they do in order to succeed,” commented Cory. “How they go about their days and their practices, just trying to figure out what they need to do in order to reach their peak. Just being in those practices, it fires you up. If you’re able to do good things against them, then you believe you can compete against them.”

Winning four consecutive tournaments and six of eight in late summer/early fall of 2020, including three AVPNext Series event stops in Tennessee and one in Ohio, Cory has been even more impressive in the early going this year. With the 2021 AVPNext Gold Tour getting underway the first week of June, Cory burst onto the scene with a remarkable run to a first-place finish at the $20,000 New Orleans Open. Partnering with Logan Webber, a 6-foot-9 blocker from Grand Rapids, Michigan, the duo took home gold at the 2021 Chaos Midwest Season Opener the week before in Ohio. The tandem also won the $3,000 AVP America Houston Open in Texas back in April.

“For me, it’s trying to make this a sustainable lifestyle and really trying to push it as high as I can go,” said Cory. “I don’t know where the limit is at right now. Every day is let’s go out, get better and keep trying to push that limit. This past weekend we just won a huge tournament, probably the biggest one of my career so far. In the tournament there were two guys who had already won an AVP Tour event, guys who had made finals, and guys who are already in the main draws and mainstays there. It made me realize I can really make it to that level.”

Cory continued, “Last summer and going into this preseason, being able to train with Olympians and seeing that I am not as far as I used to think before training with them and being able to see I can take this as far as I want to. That’s really a big motivating factor, let’s see how far I can push this thing.”

This weekend, Cory continues his professional beach journey at the AVP America Chaos Beach Volleyball Open outside of Cincinnati, Ohio.

Holding a business degree from LMU, Cory has been somewhat of an entrepreneur as of late. He has opened up his own beach volleyball apparel line, Blue Nose Beach available at BlueNoseBeach.com. The brand name stemming from Cory’s trademark blue hat and his matching blue zinc oxide he applies to his nose to protect him from the sun.

From Harrogate and his roots in southern Louisiana to the beach courts around the nation and perhaps the world next, Evan Cory is a beach volleyball star in the making.